I get arthritis just looking at that thing.

I'm coming out of hiding just to post an old man rant.

THIS, in a picture, is why I don't play videogames anymore: 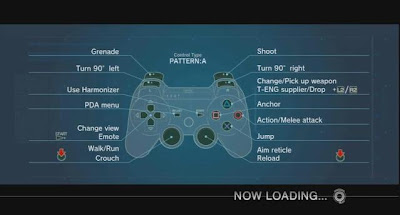 We close the year, appropriately, with the one Christmas movie in the bunch. Love Actually is one of Mrs. Mosley's favorite films. Ejiofor doesn't have much to say, but there is this memorable exchange:

Peter: "Well, give them a quid and tell them to bugger off!"

Folks, as you've seen the posts get smaller and smaller here at Acrentropy, you have probably guessed I am winding it down with blogging (and you would be right). As part of that, I'm shuttering the "Quote-of-the-Month" posts, which has been the only regular feature of this blog since I started it back in 2004. The big film project is also on hold until I find sometime in between family and (increasingly irritating) work.

I've made statements before on how I'll be slowing down only to do anything but, yet If the past six months are any indication, this time it's the real thing. For those few of you who turned in over the years, I thank you for your appreciation.

Take care, folks. Cheers.
Posted by Alonzo Mosley (FBI) at 8:22 AM No comments:

Life has put my dream project on hold, but I have kept my hand into LEGO just to keep myself sane. In this case, I signed up for a Secret Santa exchange through the members at BrickLink. My designated guy expressed a liking of Pirates of the Caribbean sets, so taking that as inspiration, I created a spiffy treasure chest (with loot and monkey)! 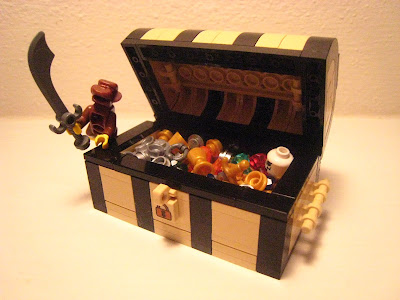 The priciest piece that I had to order were the six tan arches (Part 6183), which were only available in a couple of Star Wars sets from 2003 and 2004. Overall, I'm very pleased with the result. I can only hope that the LEGO fan in Montana I was assigned likes it as well. Merry X-mas!
Posted by Alonzo Mosley (FBI) at 10:18 PM 2 comments:

There are some movies that are required to pull off an interesting balancing act. Two characters are thrown together that appear to be polar opposites: One is uptight and the other is wild and crazy. This is the classic buddy cop mold, but it's used for much more than cop movies. The balancing part is having both characters appeal to the audience without going to an extreme with their behavior so that it turns them off.

We get a prime example of that with Talk to Me. In that film, we have a wild and crazy ex-con DJ named Petey Greene (Don Cheadle) and an uptight radio station executive named Dewey Hughes (Ejiofor). From the beginning of the movie, we like Greene and his over-the-top personality, but we also feel bad for Hughes and the trouble that Greene has given him. So when the two meet in a pool hall to settle their differences over a game of nine ball (while a crowd of bar patrons look on), It's nice to see Hughes totally turn the tables and surprise the hell out of Greene:

Greene: "I'm about to run this rack."

Hughes: "You're chalking up your cue a little heavy there, ain't you? I mean, that ain't your cellmate's dick you're holding."

(Man in the crowd laughes)

Greene: "Just for that, I'm gonna drop the nine ball off the break."

Hughes: "Nigga, you couldn't drop your drawers to fuck The Supremes if all three of them was lying butt-naked on this table."

(Astonishment from the crowd)

Hughes: "What's the matter, big time? You thinking about all that money lying in your lady's lap? Is that why you're sweating? Or maybe it's all that whiskey you've been sucking on. Or maybe you're sweating 'cause you know that even if you give it your best shot, you still might leave 'em standing. 'Cause this ain't Lorton anymore. This is the real world. And you ain't shit out here."

Green: "Are you through?"

(Petey breaks and fails to sink a ball)

Hughes: "Too bad, big time. I had faith in you. One ball, corner. (sinks the one) Two ball, side pocket. (sinks the two) Three ball, corner. (sinks the three) See, negroes always think that if you speak correct English, or you wear clothes other than clown suits, that you're not real. Four ball, side pocket. (sinks the four) And to you, what's real is a nigga loud-mouthing, right? Telling everybody how bad he is while he's looking for a handout. Five. (sinks the five) But you give him a chance to take what's his, and he can't sink one single ball. Six. (sinks the six) Lucky seven! (sinks the seven, the crowd is impressed) Now, you were so busy running your mouth, you never really asked yourself why I chose a pool hall to meet. 'Cause this uppity nigga could never have grown up in these projects, or made his way through school hustling dumbass niggas who thought he wasn't down. (sinks the last two balls) They call me Mr. Hughes. Grew up in the Anacostia projects."

Sometimes it's bloody difficult to get these quotes. Although all of the actors are stellar and they do wonderfully with the roles they are given, some are not necessarily quip-worthy. I remember wanting to use Mountains on the Moon (which I had seen many years before) for one of the Delroy Lindo quotes back in 2007. When I sat down and watched it again, I discovered that Lindo stayed mute for most of the film. Scratch that one.

That being said, I had none of these problems with Kinky Boots. It's probably a rule of Hollywood that if you're going to play a drag queen in a movie, you're going to get some of the best lines in it. And if you happen to be the star of the film, well, it's all you, baby. Ejiofor plays Lola with all the style and sass at his command, which is a lot. Picking a line from so many is a difficult task, but I'll happily dive in:

With the exception of Redbelt (which I am not counting out of personal animosity), none of the films we have covered so far have exactly been chatty. Oh sure, Serenity has awesome dialogue, but I'm thinking chatty in terms of like a stage play. Ejiofor is such a poised, fiercely intelligent actor, such a film would be an ideal place to watch him do his thing.

Endgame is part of the "Masterpiece Contemporary" series from PBS. It's the story of how a series of secret discussions on a remote estate in the UK helped to bring peace to South Africa and end apartheid. Ejiofor plays Thabo Mbeki, head representative of the African National Congress during the talks. And that's what they are: Talks. Oh sure, we get some action and suspense here and there, but mostly we get Ejiofor sitting at a table and drawing us in with his words. It's all the more appropriate, then, that his introduction is as a speaker to some UK bigwigs as he pleads his case:

“My name is Thabo Mbeki, and I am a terrorist. No doubt, that is what you have been told. (opens jacket) No incendiary devices. No concealed weapons. I am just a man, as you are. Every day, the president of South Africa, under the mantle of his state of emergency, deploys thousands more of his troops in the townships, brutally crushing the rising resistance to his oppressive regime. Yet the United Kingdom is still one of South Africa’s leading trading partners. Every company, every financial institution which continues to invest there is a source of political and economic strength to P.W. Botha. If it is true that money talks, then let it speak clearly. Let your voice join ours when we say the bloodshed of our people must end. The time to shout ‘enough’ has come. The time for you to act is here."

Posted by Alonzo Mosley (FBI) at 9:06 AM No comments:
Older Posts Home
Subscribe to: Posts (Atom)